The solar sector is one of the most astonishing technology success stories of the past decade. Ten years ago, solar power was far more expensive than conventional fossil fuels and the prospect of it becoming a mainstream part of the global energy mix was distant.

Today, growth rates are soaring, costs have plummeted and the technology is, in most parts of the world, already cheaper than fossil fuelled power plants. “Solar and/or wind are now the cheapest new source of generation in all major economies, except Japan,” according to BloombergNEF’s Levelized Cost of Energy report.

China dominates the solar sector, both in terms of production and installation. “There is about 500GW of installed solar capacity, with about 175GW of it in China”, says Xabier Viteri, Renewable Energy Business Director at Iberdrola. “Germany, Japan and the US have about 50GW each, with India at about half that level.”

Europe, despite being the most mature solar market, is currently experiencing its own growth surge. “Our forecast for this year sees solar demand surge by over 80% in Europe to 20 GW, and an 18% growth to 24.1 GW in 2020, which would be a new installation record, surpassing the 22.5 GW Europe added in 2011. says Walburga Hemetsberger, CEO of SolarPower Europe, a 200+ member-led trade association serving 35 countries. 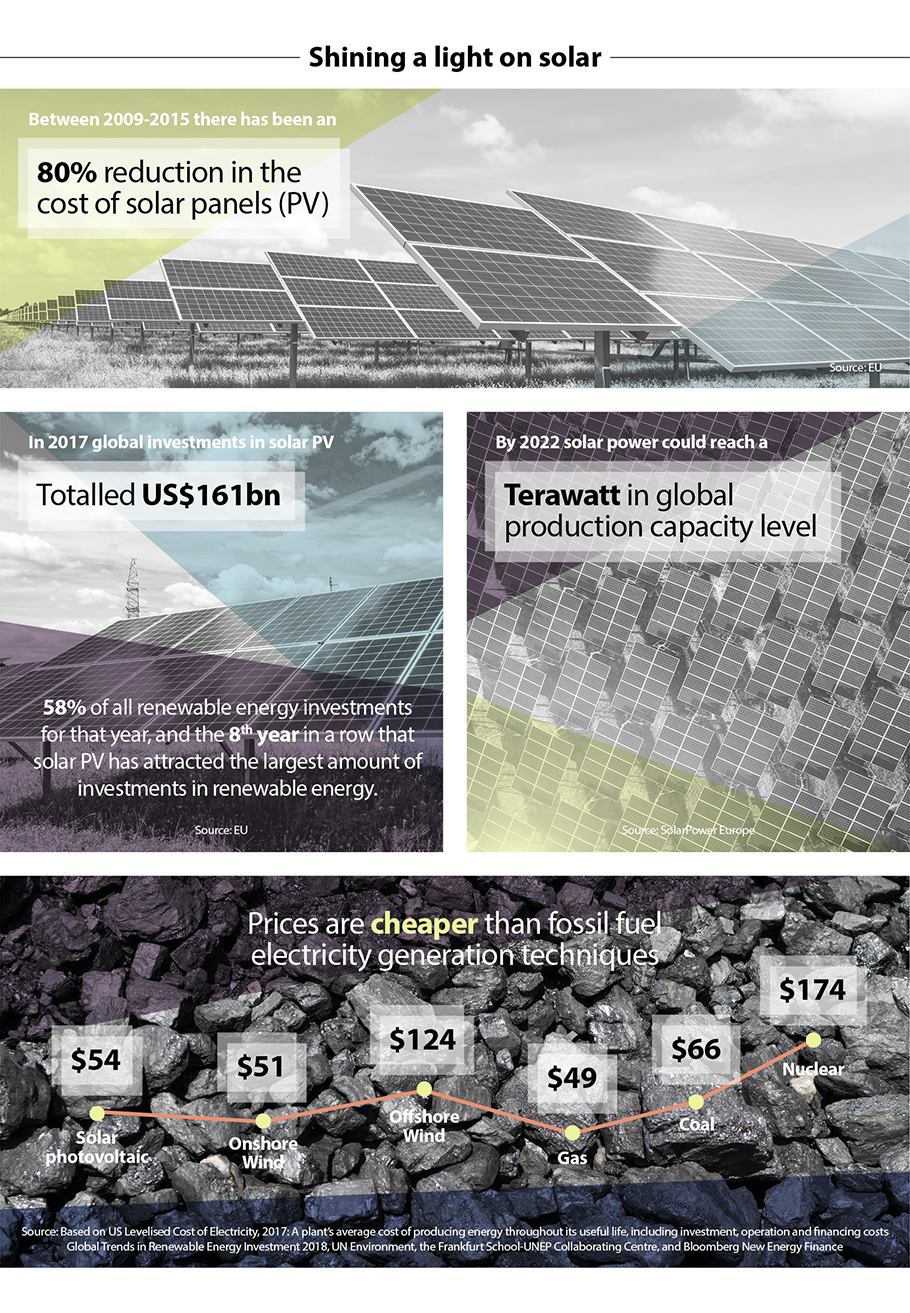 This level of growth is the result of ongoing cost reductions and strong European targets for renewable energy. “The cost of solar photovoltaic (PV) has dropped by more than 96% since 2000. At the same time, we are approaching the deadline for the EU’s 2020 renewable energy targets. As the lowest cost and most easily deployed clean energy technology, national governments are increasingly opting for solar to reach their energy and climate targets. Hemetsberger adds. “The ambitious 32% target for renewable energy in the EU by 2030 means we can expect much more solar to be installed.”

The declining costs are partly due to the economies of scale generated by the enormous levels of deployment around the world and also partly due to technological improvements at all levels of the industry. The PV cells that generate the power are becoming more efficient, with new materials such as Perovskites, thin-film silicon-free materials that can be “painted” on to a surface, set to create more flexible, lightweight and non-uniform options.

There are also improvements in modules, where bifacial models that can generate power from both sides of a solar panel can increase generation by up to 30%, while at a systems level, grid-intelligent solar makes it possible to better integrate solar into the grid and provide grid services. And if solar is combined with storage, it is now possible for the technology to provide baseload power. This is fast becoming a reality, with almost two thirds of solar customers in Germany also buying storage.

The potential for further growth is huge because, despite the growth of the industry, it still makes up only 4-5% of the total electricity mix. “With the growth rates we are seeing, I am confident that, with the right policy framework, solar can cover 20% of the EU’s electricity demand by 2030,” SolarPower Europe’s Hemetsberger says.

This seems entirely feasible when you look at the ambitions of some European countries. “Spain, for example, plans to have installed around 37GW of solar capacity by 2030, up from about 8.5GW in 2020”, Viteri points out.

The profile of the market is changing as it develops, with falling costs meaning that subsidies are becoming less important and corporate buyers are becoming an increasingly important market. Some 16GW of solar has already been installed through Power Purchase Agreements (PPAs) and some key administrative barriers have been removed in the latest EU energy package. “The reduction in cost makes solar attractive for companies. All of the big companies have serious renewable energy commitments,” Viteri says.

“Another advantage of PPAs is that they encourage new renewable assets to be installed – they are another source of demand,” he adds. “Solar is essential to the low-carbon transition. It is the most scalable and versatile technology.”

And while Europe has lost the battle to make solar cells and modules to China, there are still good businesses and opportunities in Europe. With the new European Commission set to focus on a new industrial strategy, SolarPower Europe’s Walburga Hemetsberger is calling for solar to be central to a strong and ambitious package. “We want solar, as a green technology, to be one of the pillars of the strategy. We will see huge growth in the sector over the next decade, that can bring thousands of local and clean jobs. Today, solar is the world’s fastest-growing power generation source - the future of solar is very bright indeed.”